Meridian police have arrested a second suspect involved in a robbery and assault that happened early this month. Police say 33-year-old Joshua Thrash and Fred Cosby assaulted a man on 34th street and took his wallet. Cosby was arrested shortly after the incident, and Thrash, last night. “We issued warrants for his arrest. He was located somewhere in Alabama. He was brought back to Mississippi and booked and charged with armed robbery and aggravated assault,” said Sgt. Dar
44 views0 comments 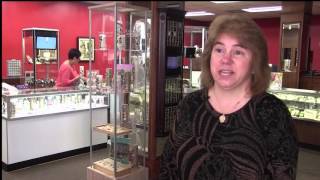 Police are searching for a man who stole from Labiche jewelry store in downtown Meridian this afternoon. The man was trying on jewelry in the store and suddenly ran out with it without paying. Two sales associates ran after him, while another associate called the police. “I want to say I’m just happy that nobody is hurt. Things can be replaced and people can’t. So that’s the most important thing. We just appreciate the community supporting us and helping us out. Let’s fin
13 views0 comments